Left home at 8.30am car all loaded, with guns, spotlights, and camo and headed back up to Costerfield for a few days hunting with my son, after a two hour drive arriving at our destination.

Sat down with my son and discussed our plan of attack for our late afternoon/ evening hunt. We figured we had two separate properties to try out of the many we have accumulated around this area.

Our first area is a very open paddock used for sheep grazing, with a corralling yard set off to one side. We used this area as a cover to hide our silhouettes.

Put the GC500 out about 50 yards away, wind had died down to nothing. Called using the SS call I have loaded on to it.

We tried a few different calls over a period of time, but with no joy, deciding to wait until after sunset, and using the caller under light.

Once dark we tried again, putting the caller out about the same distance, and immersed ourselves in amongst the timbers of the corralling yard.

After a short amount of time we noticed many sets of eyes scattered around the area out at probably 250 metres. They would come into within 150 meters and just sat there, we figured they must have been very young as their eyes were very close to the ground.

We watched these for a while, but never got them in close enough after trying a few different mouth calls.

We decided we try the other area up the road about 3 kilometres away, and leave the corralled paddock until tomorrow night hopefully they are more inquisitive on a second approach. This area is an open area used for crops which has a huge hay shed in the middle of it, and a low lying swamp area in amongst trees at the rear.

Driving in through the main gate we had a flick around with the spotlight to see if there is anything out in the open.

We decided to park the car about halfway between the gate and the hay shed, facing towards the swamped area.

Placed the called about 50 meters further up the track, and sat back in the car, and my son looked around with the spotlight.

I selected the cottontail call on the GC500, and let out a few calls. I was thinking to myself , was anything going to actually come out to a car sitting in the middle of a paddock with a screeching rabbit call coming from just near it.

My question was quickly answered… After sitting in darkness, and with only the light from the half-moon shining down upon us, we once again turn on the light and sneaking down alongside us about 30 meters away, was our prey, it didn’t look at the light at all but was on a mission to get to the caller in stealth mode, we caught a side view of it as it was getting closer.

Having my .22 Anschutz rifle poised with the barrel resting out the window of the open car door, I raised the scope up to my eye to follow our prey as he snuck in.

I took the shot with a loud thud as my bullet met its mark and watched the fox drop on the spot. 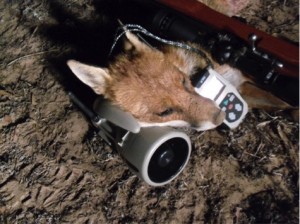 We Figured we would wait before we collected the fox in-case something else came into the call.

One came in from behind the car about 100 meters away but must have picked up scent and rapidly took off.

We packed up the caller and put the gun on the back seat in-case we came across another victim while looking for the carcass.

Driving up to the hay shed and just a short distance away we found our prize, a large fox fairly shabby fur, but a big dog.

Took a few happy snaps for prosperity reasons and then took the scalp, here there is a $10 bounty on foxes, it doesn’t matter what size, pup or dog all the same just need to present the scalp.

Was a great night out spending time together with my son.

We will hit the corralled paddock again tonight.