Just thought I’d give you an update on how the whistle went. 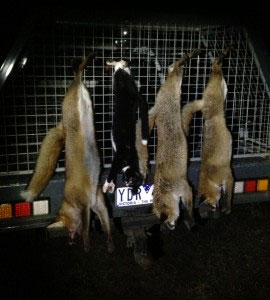 We went out Saturday night in rather average weather (it was about 6deg Celsius and rained on and off). We had a drive through the property spotlighting for foxes, found a few but they were too skittish and refused to come into any calls.

We ended up in what we call the “rock paddock” as it has massive rock piles dotted around it (it’s about 500 acres) so I started using the Best Fox Call SS fox whistle on and off for about 5 minutes. I caught a glimpse of what I initially thought was a lone sheep, turns out it was a good sized female, she hung out at about 400m. I used another call I have called the “scotch caller” to bring her in and hit her on the run at about 130-140m

We kept our search going and came across a feral cat sitting in a tree. That cat responded well to the Best Fox Call SS fox whistle and was taken at about 160m with the Weatherby Vanguard .223

We pushed on further and picked up a male fox hovering about 60m from the Ute straight through the right eye and was taken without the need for a call.

The last fox for the night has definitely become my favourite fox taken to date. We were scoping the main road through the property and I saw what I initially thought was a reflector, turns out it was a good sized female. I gave the Best Fox Call a few good blows and she responded very well however she ran around us heading for downwind. I tracked her the whole way through my Leupold vx3lr scope. She got down wind of us but off to the side a bit and couldn’t make out what we were. I ranged her at 275, took a breath and boom. The round hitting her spun her around and she was done.

All in all we had a great night, the Best Fox Call SS worked very well. I’ll continue to use it and keep you updated with how I go.