The whole point of this trip was to see if I could get Glen his first fox. I picked him up at 9:00 and we set off to our destination in Dean, Victoria
When we had arrived we pulled up into the gate and immediately I turned the M3X Triton light on and caught a pair of eyes. We had nothing set up yet, silly me. A bit of fumbling around and we were set up. Mounted the GC500 in the back of my ute and started playing “handcall”. Scanned the general area with the torch and the pair of eyes had disappeared. We both got in the car and we continued on. Drove to the end of the lane and stopped near a paddock of sheep.

At this point I had the bigger spotlight connected to the car battery. I was mounting the spotlight while Glen had the Howa Varmint .223 fully loaded. I scanned the area around the sheep and kept moving side to side. Plenty of sheep eyes until a different pair of eyes caught my attention in the long grass. I pressed play again on the GC500’s remote. Continuing to play the hand call. This went on for at least 20 minutes and it wouldn’t move much nor come any closer. I changed the call to “lone lamb” within 10 or so minutes we had a fox run out from a nearby paddock straight in front of us. Before I knew it Glen had pulled the trigger and nailed it! We both went and retrieved the fox and looked to see where he had shot it. Straight through the head and smashed the jaw on the exit. The fox that just sat there looking we decide to leave for another day. 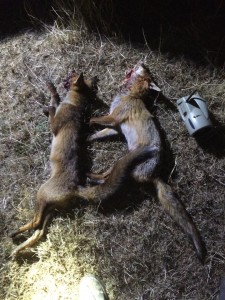 The girlfriends grandfather wants rabbits so we head off to another paddock where the rabbit population has overran the warrens. We get into the paddock and start driving around. I turn the spotlight on to catch another pair of eyes in the distance. I put the foot down on the Ranger and took off across the paddock hoping to cut it off from going across the local road into another paddock. As I get closer I stop the car and start the caller up again. This time Glens on the spotlight and I’m on the .223. I look under the tree line about 50metres away and here are the eyes again. So Glen grabs the M3x Triton and we sneak up towards the tree line. As we get to the tree line the fox is completely out of sight. We’ve lost him! After at least a good 5 minutes we decide to just go back to the car. As we turn around we see a fox hovering around the vicinity of the ICOtec GC500. I drop one knee and get steady and take the shot. Fox down! Another head shot with the American Eagle Ballistics. After this we call it quits and we go home.